When you think about riding a Harley-Davidson, you often think about the long and wide American highway; riding your bike towards the sunset.That this cliché is not always right is shown every year in Ridnaun in South Tirol when it is time for Harley & Snow. For two days, motorcycle enthusiasts race their bikes up a ski slope! Or at least they try… Last year Dr. Jekill & Mr. Hyde was present for the first time and it was quite clear that we would come back this year!

Instead of 2 like last year, no less than 6 riders were sent to Ridnaun this year. Last year Harley & Snow was the debut of our custom made BMW R nineT. The bike that was built by Nic Nagel got the fitting nickname ‘Husky’. This year 2 riders would try to conquer the mountain on this bike: Thilo Guenther and Roland Stocker. Thilo is a motorcycle racer who last year rode all the way to the top of the Pikes Peak in Colorado and Roland Stocker is a project manager at BMW Motorrad and is known as the ‘father’ of the R nineT.

Of course we also brought some Harleys with us. Sales representative Frank built a Sportster especially for the event and technician Matze bought the Hydster: the customized Sportster that he also used last year. This year not only Matze would ride the bike, also Anita Bernardini from the Bikerladies Mainhatten would race on the Hydster. Last but not least in the Dr. Jekill & Mr. Hyde racing team was sales representative who got his KTM cross bike down to Tirol.

The first attempt to climb the mountain was done by Frank. It became clear very fast that this would not be an easy task. Shortly before the mountain Frank lost grip and the race was unfortunately over. Next it was Matze’s turn to take a crack at the mountain. Even though he gained experience from last year’s race he refused some extra training, Matze: “When you train, you betray the other contestants.” Although he had a really good start, just before getting up the slope, his bike slipped and Matze and his bike went down elegantly. Anita was just as unfortunate on the Hydster and she also did come very far.

After the Harleys it was time for the Husky to show its worth. Thilo started perfectly and he rode the Husky to the top like a real champion. Immediately followed be the disappointment: Thilo started to early and the jury did not acknowledge his race. As a result the presenter of Harley & Snow served with a bunch of snowballs from the whole Jekill & Hyde crew. Thilo then immediately started again, but unfortunately this race was over quickly because he did not get the second gear in and therefore could not pick up any speed. He slipped away and thus the race was over.

For Roland, driving on snow was also a completely new experience and had his problems getting the Husky up the mountain. But no worries, there is still day 2. Peet was the last Jekill & Hyde rider for the day and he got up the mountain in just 15 seconds. But that was not enough for him; he signed up for a different class where it went up the mountain with 3 or 4 bikes at the same time. He drove up another 4 times! 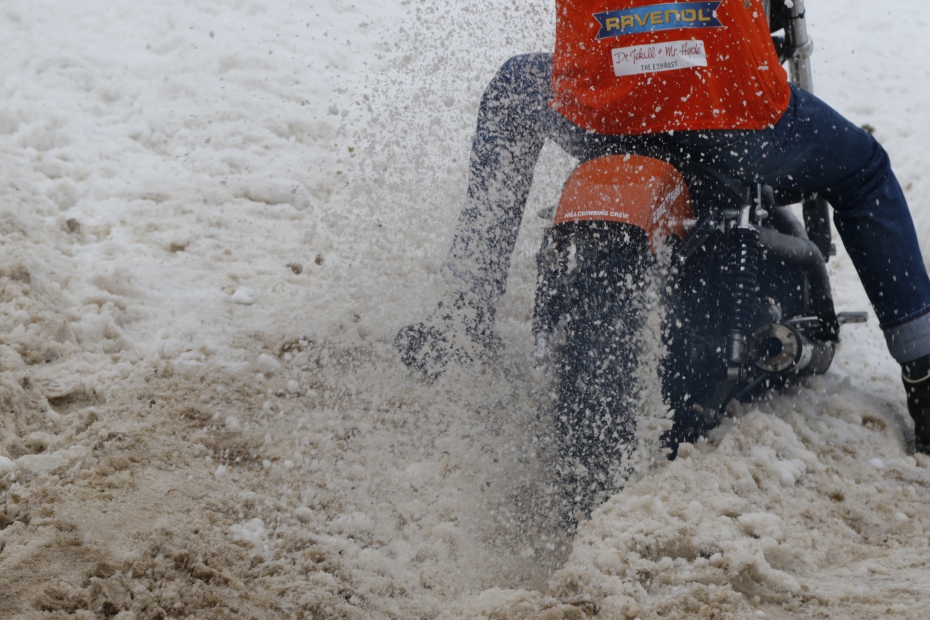 The second day was a lot better for Frank and he got to 70 meters with his Sportster. However, there was bad luck for Matze: he had broken his belt drive, which meant game over for the Hydster. Matze: "Next year I’ll be back with a chain drive!”

Now that the Hydster was out of service Anita suddenly did not have a bike anymore. But there was Franks' wife Carmen who gave her the key to het Sportster. That's teamwork! This meant that Anita could make a second attempt. Unfortunately, the weather conditions prevented her from getting very far. Now it was time for our Husky again! Roland started first and he rode way further than the previous day. Thilo made a good start and everything seemed to be going well. But halfway there was not enough power left and he had to give up.

Thilo: "I actually got off quite well but somehow I did not get enough speed and at 105 meters I was finished. But it was really fun and I could not ask for a better team partner than Roland." Seems that we have our BMW Team set for next year!

Day 1 was not exactly a good day for the fork of Peet's KTM: the suspension did not work anymore. So there was an extra obstacle to climb the mountain. But thanks to his driving skills and going full throttle he climbed up the mountain anyway.

Just like last year the audience could win a great prize; a custom bike. This year the bike was made by the guys from the legendary Orange County Choppers. The bike was of course equipped with a Dr. Jekill & Mr. Hyde exhaust system. The bike was flown in by helicopter and one lucky winner could take it home.

Harley & Snow was the first highlight for 2018, where fun and the love for motorcycles is definitely the most important part. We'll be back next year, hopefully you too! 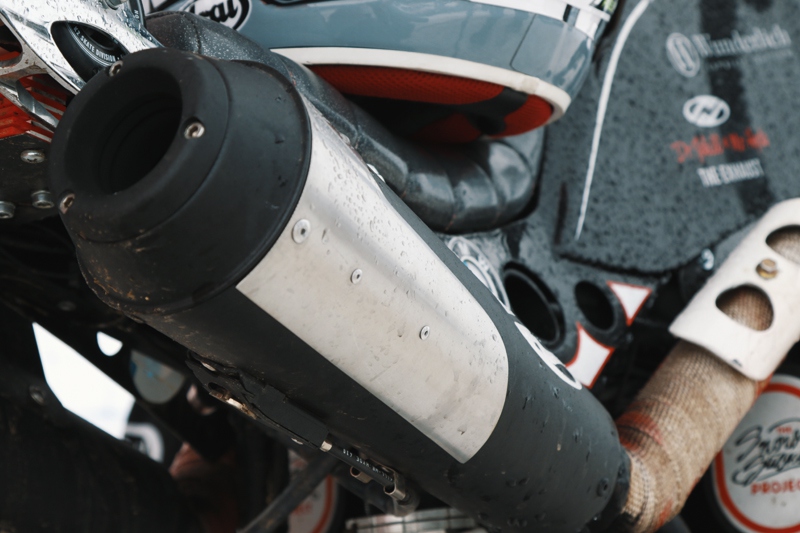